Suikerbossie in Hout Bay holds childhood memories of Sunday tea. Scones and cream. My U3A Fynbos Ramblers took me above that restaurant. A little pocket of the mountain that has missed the many wildfires, where I saw my tallest and oldest yellow pincushion Leucospermum conocarpodendron. Companion in blue for scale. We crossed a remnant of Thomas Bain's road lined with Eucalyptus. Victoria Road along the coast between Camps Bay and Hout Bay was built in 1887. Another place and time, and the flowers were also in a parallel universe that day.

December flowers above Suikerbossie. Micranthus alopecuroides comb flower in vibrant lavender. Cyanella hyacinthoides Lady's Hand (resembles hyacinth?) Watsonia borbonica I remember an after fire year in Camps Bay when the whole slope of Lion's Head was this colour! Arctotis aspera with monkey beetle. Lampranthus emarginatus shimmering pools of mauve. Corymbium africanum with iris leaves is, an endemic daisy! Lichtensteinia lacera will be a pale yellow umbel (Beware of the related blister bush which looks like celery!) Relieved to see invasive alien pines that come up after fire were ring barked. Berkheya armata with sharp teeth. Hibiscus aethiopicus trails along low to the ground. Crassula flava not orange or red, but lemon yellow - this one I noticed. Commelina africana while the commonorgarden Tradescantia is blue. Otholobium fruticosans in purple and white. Indigofera psoraloides not indigo but terracotta. Aspalathus cephalothes var violacea not the expected yellow. Rafnia angulata yet another yellow pea to learn (Rafn was a Danish botanist)!

Cape of Storms with a trail of shipwrecks. His hike started near the same Hout Bay Neck but headed towards Sandy Bay. Cape Town's nudist beach if you want an all over tan.

To Oude Schip Island and the wreck of fishing vessel Harvest Capella 1986 they crossed an isthmus. Walking on water. IN water as it was deceptively clear but at low tide you can cross.

At the end of November we were at Redhill. On the slope above the road was a horde of Agapanthus africanus. A few early flowers with many more promised for Christmas.

Ruined farmhouses at Redhill. Maylands and Kleinplaas survive only as names on a hiking trail. New houses are being built at Dido Valley for land claimants.

In November he hiked above Misty Cliffs over Redhill and down to Scarborough via Baskloof Fynbos Private Nature Reserve.

Resting above Scarborough with U3A hikers.


I invite you to join us at Elephant's Eye on False Bay. Please subscribe as you prefer
via Feedly,
or Bloglovin,
Email with Feedburner,
or Facebook 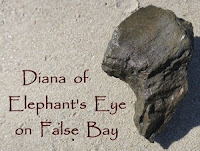