The shock of hearing my surgeon say – the Treatment of Choice is a mastectomy. Of choice? Mastectomy is a “treatment”. George Sand in Paris appreciated the expertise of surgeons who had just honed their skills in the Napoleonic wars. Fanny Burney wrote in 1812 about her mastectomy, TWO hundred years ago, pre-anaesthetic New Jacksonian blog 2010.

… women who were alone, teaching them to join together,
for there is hope in two women,
help in three women,
strength in four,
joy in five …
From Sheri S. Tepper in Gibbon’s Decline and Fall

In a Reach for Recovery meeting, I was relieved to be with other women, who had been there, done that. Newly diagnosed, just treated, or a reminder that the future does still exist. Someone who said – other women have gone this way, made this journey … follow the path, made by their footsteps.

Published in London, by Jonathan Cape in 1969 in New Numbers. The poet originally wrote it for an Apollinaire exhibition poster at the ICA, with the title “Apollinaire said”, but it was NOT written by Guillaume Apollinaire.

My Strong Family History. It was a month before her twenty-fifth birthday. With a young husband caring for their toddler, and baby. 50 years later, thanks to surgery and radiotherapy, her daughter can say to a sympathetic doctor – NO, No, my mom is fine! I celebrate the courage that printed the steps I follow in. Her two daughters. Her granddaughter.

A second layer of strong family history, is my mother's mother. She was over 60, and each decade that passes increases your risk. They said, breast-feeding your children protects you from breast cancer. My fault - I had no children. My sister got breast cancer, WHILE breast feeding! Most breast cancer patients have no such family history. We need Vitamin D to fight against breast cancer. Doctor told me they had just compared - Johannesburg gets enough winter sun, but Cape Town does NOT. Night owls and melatonin.

It was January 2000, as I lay sleepless, between diagnosis, and surgical biopsy, and a mastectomy. The worst fires in Cape Town that I can remember. Everything burned except Cape Point Nature Reserve and half of Table Mountain. On the first programme of Cape Talk radio station Rod Suskin talked about fire as a cleansing or purification ritual. My cancer was only a few millimetres, no need to burn down half of Cape Town! When I looked back at my journal, they were evacuating houses in Constantia and Simon’s Town. In 2009 Porterville had Fire-on-our-mountain.

W. H. Auden in his poem "Miss Gee" defined cancer as 'foiled creative fire'. Teilhard de Chardin said that when we discover how to be truly loving, we will have discovered the power of fire for the second time. The best words in the English language – this sentence from my surgeon’s report. She needs no further treatment.

I was cared for by a GP who told my sister – Diana is strong, she’ll be fine. A surgeon who answered a thousand questions, and left me with a body I can live in, and a scar I can see and touch. A breast cancer specialist who said – nice scar! – high praise from someone who spends her day looking at mastectomy scars.

My body is complete, because it ends here. I have lost the source of that quotation.

As anonymous said
Dust we are
And to dust we shall return
And in between, we plant a(nother) garden.

Two wonderful memories. I would wake each morning and tell my body to stretch, from the tips of my fingers all the way down to my toes. One morning I woke up, told my body to stretch, and, it DID! Second was being carried through the waiting time between two operations, in a state of grace. My Swiss friend lit a candle for me in a church in Austria, and my mother and sisters lit a candle for me in Cape Town. The mind retreated from the horror of the biopsy. Waking up after surgery, with body and mind hand in hand again.

The other survivors I met at Reach for Recovery giving me a path to follow as they shared their own journeys. Harvesting the books I read.

"I am no longer afraid of mirrors where I see the sign of the Amazon,
the one who shoots arrows.
There was a fine line across my chest where a knife entered,
but now a branch winds about the scar and travels from arm to heart.
Green leaves cover the branch, grapes hang there and a bird appears.
What grows in me now is vital and does not cause me harm.
I think the bird is singing. I have relinquished some of the scars.
I have designed my chest with care given to an illuminated manuscript.
I am no longer ashamed to make love. Love is a battle I can win.
I have a body of a warrior who does not kill or wound.
On the book of my body, I have permanently inscribed a tree."

My experience was inspiration for the four beds at Paradise and Roses in our Porterville garden.

Dedicated to the memory of
my sister Margie in October 2015

and Berlinde Stadler
1958-2010
Librarian to Porterville 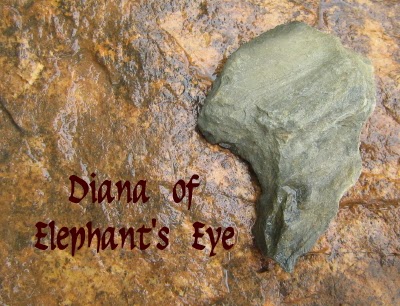 (If you mouse over teal blue text, it turns seaweed red.
Those are my links.
To read or leave comments, either click the word Comments below,
or click this post's title)
Labels: colour Our Story South African / mediterranean plants 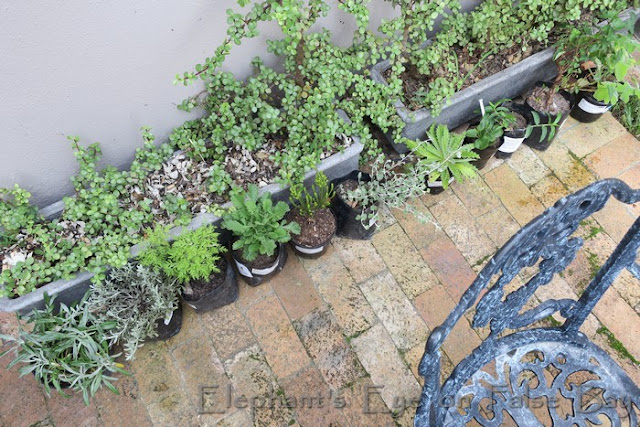 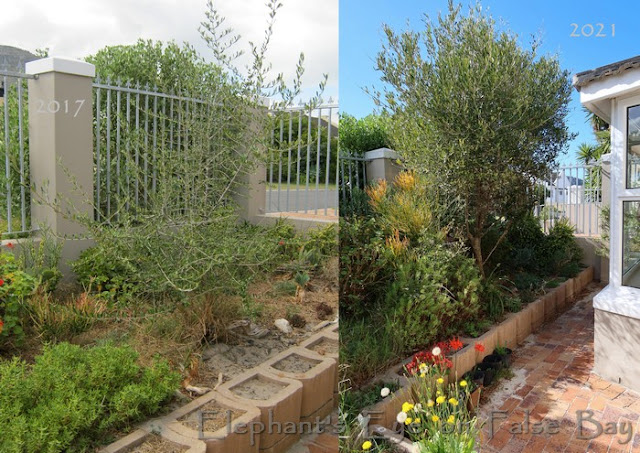