Wherever I go, rocks and stones, follow me home. My signature is a palm size relief map of Africa, complete with our ridge of Cape Fold Belt mountains. If you travel from Cape Town along the Atlantic seaboard to Hout Bay. Drive further up to Chapman's Peak. In earlier years, the most beautiful stretch of road I have ever travelled in South Africa. When the Ungardener was first a tour guide there was an elderly African gentleman, who spent his working day keeping the road clear of fallen stones.

Then a woman was killed in her car by a falling rock. The road was closed, loose rocks removed. How wonderfully, gloriously different was that view, when we were walking along, quietly chatting. Silence, just a brisk breeze and birds calling. Diana is always searching for rocks, and I found Africa!

My sister found a heart shaped stone, but I have only found our initials. D, then J, as we were travelling across the Karoo on a wedding anniversary. Later Jurg found an L to slot in. D L J. Type-the-sky

Our paths and driveway in Porterville are covered with gravel. What we could afford. And allowing winter’s downpours to soak into our garden. Another souvenir of his working days was a litre of tumbled semi-precious stones. Which he scattered amongst the crushed sandstone. To the delight of small children, whose eyes are so much closer to the ground!


When I was at school, the Parade was a place to pick thru junk and antiques. There I found this square glass jar, with its faceted stopper. Other women remember a passing stranger who gave them flowers. Faded and gone, but the memory lingers. I was a geology student, heading home on the train, when a young man gave me a handful of tumbled stones. Now the collection has gained a tiny blue circle of sea glass, a few slivers from the chunk of rose quartz, a flake from the sand rose, rounded sea pebbles, a couple of sharply squared off ‘pebbles’, some rough diamonds.

I no longer remember where I found my pink bird in flight … The rock with the shell embedded is from my sister, when she visited her daughter somewhere in the Americas. The limestone is the Ungardener’s, from Malta. For once we had a quiet peaceful leisurely holiday (except it was autumn, bird hunting season). The houses on Malta are built of this soft golden stone, and Jurg asked one of the startled stonemasons for a small piece to take home. The red chunk of lava is a piece of Ascension Island, from when we returned on the RMS St Helena.

Those lenses of fine sand, are naturally formed together to create sand roses. Found buried in the Sahara desert. The hand axe and the tiny flaked stone chisel, were both acquired by the Ungardener, somewhere on his travels. What a profound feeling, to hold in your hand, a tool, made and used in the Stone Age. What I felt in the temple at Ggantija on Gozo. Where people once worshipped, 2 thousand years ago. 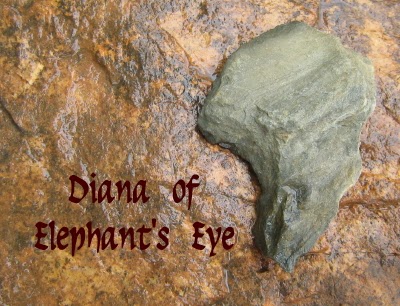 (If you mouse over teal blue text, it turns seaweed red.
Those are my links.
To read or leave comments,
either click the word Comments below,
or click this post's title)
Labels: Our Story