My arum, your calla

Today when I want a fresh picture, the flowers have slipped away. But I caught one ten days ago. It’s a plant I cannot imagine my garden without.

As my Dozen rounds out I need some large leaves for drama. The arum has heraldic arrow head leaves, stately green banners, with furled edges and a delicate spire to echo the flower. Once the flower is history there is a knobbly tight package of green berries.

In spring as we travel across country, along the streams, in every dip and hollow, there are swathes of proud white flowers. Now they are sold as cut flowers, then they were pig food. Partnered by Melianthus which likes its roots along the stream.


The plant once harvested by my father beyond Camps Bay, was planted again in Apple Creek. Now fighting a bitter battle against wild grasses and dwarf papyrus with a swarm of tree seedlings. Added to my to do list.


I’ve learnt that just because it looks like an arum, they are not all created equal. The spotted leaf disappeared without a trace, followed by the Green Goddess. While the bog-standard white one is suited to our mediterranean climate, revelling in winter rain, and hunkering down in summer – the fancy varieties and unusual species are from the summer rainfall side of the country, retreating in horror from our soggy winters. Gone, without a trace.

The leaves of Z. aethiopica are cooked as a pot herb by the African and Indian communities in South Africa. They boil the leaves before braising them in oil with onions and chillies. The cooked herb is eaten with maize meal porridge. The herb adds flavour. Both boiling and tamarind seem to effectively break down raphides of calcium oxalate in the leaves. If not properly cooked, the herb causes a burning sensation in the mouth and throat. The presence of raphides may be of relevance to anti-herbivory (Do NOT eat me) - from  PlantZAfrica

Zantedeschia has 8 species, 7 are ours, and the eighth reaches Tanzania. My October choice is Zantedeschia aethiopica. In the Araceae family with true arums, Anthurium, Caladium and Philodendron. Zantedeschi was an Italian botanist, aethiopica = south of the known world (Egypt). In 1664 there were South African arum lilies growing in the Royal Garden in Paris. The white which we see is trapped air bubbles. Supporting beetles and bees, a tiny frog (IN the flower), and birds will eat the seeds.

I am choosing a plant each month. Third round is plants from our Porterville garden which will one day be happy to flourish in False Bay. The arum is already growing in our new garden. Those white flowers light up shady corners.

What says October in your garden?

Donna @ Garden's Eye View in central NY State brings us dill. A herb I’ve recently discovered (dry in jars, not a Grow our Own) which I sprinkle lavishly on potato salad or scrambled eggs.
Beth @ PlantPostings in Wisconsin has Bacon and Eggs, Lantana in an exuberant range of colours. 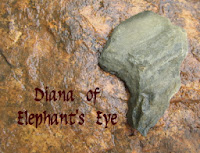 Pictures by Diana and Jurg
text by Diana Studer (on Google Plus)
AKA Diana of Elephant's Eye (on False Bay)
- wildlife gardening in Porterville,
near Cape Town in South Africa

(If you mouse over teal blue text, it turns seaweed red.Those are my links.
To read or leave comments, either click the word Comments below,
or click this post's title)
Labels: South African / mediterranean plants