After two years our garden displayed bones planned and built by the Ungardener. My shrubs and trees showed what they are made of. Step Through the Garden Gate with Sarah Down By the Sea in Dorset


Out front on Karoo Koppie, the aloes I planted are hip high with fierce pokes if I get too close. Willowy olive sapling would shield our bay window, without the tapestry hedge on the verge.
Graceful offset path from Summer Gold to Spring Promise is getting blurred.
Winding past Froggy Pond (frog IS still behind the dwarf papyrus). Birds roost in our carob overnight, he trimmed another slice. Next door's palm was small in 2017, our lemon happier pre-drought.
Edible banana at this end, is coming up fresh. Tallest section of distant Strelitzia nicolai is on the cutting back list. Washing Pergola freshly painted on its weatherbeaten top.
Two bonsais, seedlings from the Camps Bay garden where I grew up. Five cypress trees - trimmed the top, sorted the stones to an 'outcrop'. Cotoneaster had been trained with exposed roots, trying to work in stones to make the 'cowboy with no horse' look as if it grew that way.
Back in 2017 when the Ungardener was teaching Thomas to be a Swiss cat and use his ladder to climb the wall. Since he jumped down the other side ... he cut a cat flap in the gate. At first a Perspex flap so they could come home, but not get out (but, see 1 above, ladder!) Now no flap and they come and go as they please, reserving the ladder for neighbourhood watch stints.
On Sunday they were occupewing our pies. They liked to sleep under the overarching grass, which I cut back from the path.
This year's junior hadeda keeps a wary eye on us, as he digs around pots for beetle grubs or snails.
Mine is not an I Didn't Choose It, I Didn't Plant It, OUT, garden. Purple sedge Cyperus congestus volunteered. Waxbills need soft (green growing) seeds. Feeding on the arching stems, with others collecting what they drop.
Our April has been dry and sunny. Photographing a hummingbird hawkmoth, I found a disgruntled preying mantis who lost her lunch. Spires of delicate white flowers on red-leaved Crassula capitella. Scarlet and gold sparkles Nerine sarniensis. Wary of this cluster of smaller flowers reverting on my South Africa rose, I cut that stem back. Under the trimmed carob, an apricot Tecomaria. Next to velvety orange Leonotis. I leave most of the dandelion / Hypochaeris; flat yellow daisies are perfect for rescuing tired hungry honeybees for Gail at Clay and Limestone in Tennessee and her Wildflower Wednesday. Euryops with green, and silvery, leaves - with pollinating fly.

Fire on Table Mountain, began next to the freeway on 18th April. Swept up thru 'heritage' pines. Exploded gas tanks at Rhodes Memorial restaurant. Swept down to take out Jagger Library and the top floor of the biology building at the University of Cape Town. Finishing with Mostert's Mill burnt to the ground.

We had a new weapon this time, manned drone, eye in the sky

Hermes the caracal alive and well after the fire

Devastated library, African Studies with films and documents from the Struggle years, and New South Africa. Everything at the Plant Conservation Unit.

Aerial photos after by Jean Tresfon 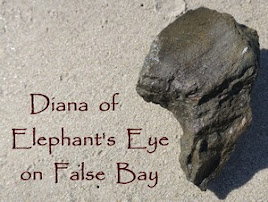 To read comments if you are in email or a Reader,